Please help us keep everyone safe by practicing the Five Commitments of Containment.

Everything in the greater Telluride region relates back to the story of the surrounding mountain range. The San Juan Mountains are a part of the Rocky Mountains, which run north-south through the state of Colorado. The San Juans are a high-altitude environment and provide a variety of natural habitats: tundra, mesas, peaks, forests and riparian zones.

A timeless valley shaped by time herself.

For centuries, these rugged mountains provided protection and food to nomadic tribes who came to the valley to make camp in the summer. The Ute Indians followed the San Miguel River and the abundance of such wildlife as elk, mule deer and bighorn sheep. Also native to the San Juans are marmot, pika, hare, chipmunk, squirrel, porcupine, beaver and a wide selection of birds, such as mountain chickadees and pine siskins. Other less-seen wildlife found in this pristine wilderness includes mountain lion, coyote, black bear, bobcat and lynx. In the winter, the Ute would descend to lower and dryer lands to make camp in the red rock desert climates farther to the south and west.

The San Miguel River, a lifeline in Telluride’s past and present, is an eco-system of its own. This free-flowing stream originates high in the mountains and drops more than 7,000 feet, starting from an alpine setting and ending in the deserts of the Southwest. The San Miguel converges with the Dolores River and, ultimately, flows into the Colorado River. The water, at times, is confined to narrow, steep, red rock canyons and is home to brook trout up high and cutthroat, brown, rainbow and cutbows downstream.

In the southern portion of the Rockies, sedimentary rock and volcanic rock exist. The San Juan Mountains and surrounding areas are particularly mineralized, resulting in the mining industry of early Colorado history. In the hills high above Telluride, lucrative veins of gold and silver were harvested from the mid-1870s to the mid-1920s. This mining activity established paths that zigzag the range, some of which are now jeep roads that are still used today. 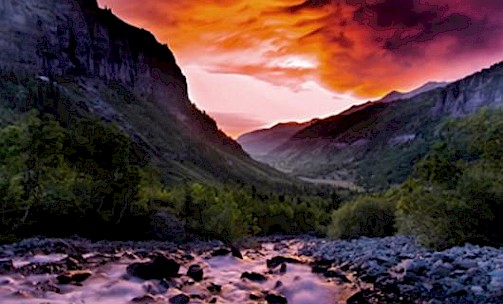 Immerse yourself in this rugged landscape.

Imogene Pass, which connects the town of Ouray to Telluride, is popular among these historic routes. The top of the pass sits at an elevation of 13,114 feet and overlooks Tomboy, Marshall and Yankee Boy Basins. To the immediate south, Black Bear Pass is one of Colorado’s most dangerous drives and is passable in only one direction because of a treacherous stair-step section. Expert driving skills are steely nerves are needed to descend this road. Even farther south, Ophir Pass connects the west side of the San Juans to the east. Access for all these passes is by 4x4 vehicle and they are only open in the summer.

In addition to the jeep roads, miles upon miles of hiking trails crisscross the mountains. Many hikes start from the valley floor and meander through aspen groves and onto mountain mesas and ridges. The San Juan and Uncompahgre National Forests cover a large portion of the San Juan Mountains and both have extensive trail systems.

Bridal Veil Falls runs at the eastern end of the canyon. At 365 feet, it is the longest free-falling waterfall in the state of Colorado. In the summer, high-clearance vehicles can access the top of the waterfall. Beyond the waterfall is Black Bear Pass, which is a one-way road to the west. In the winter of 2008, the falls reopened to the public for ice climbing after decades of access complications.

The power plant house, located at the top of the waterfall, is owned by Eric Jacobson, who restored the structure. The generator inside provides approximately 25 percent of Telluride's electricity and was originally used to power the Smuggler-Union Mine.

More About About the Valley