The Telluride Tourism Board’s mission is to market and maintain the quality of the Telluride region experience for the benefit of both the visitor and the economic sustainability of the community.

Marketing Telluride Inc. (MTI), operating under the DBA Telluride Tourism Board (TTB), was formed in 2005 to assume the responsibility of marketing the Telluride region as a year-round destination. The Tourism Board is a private, not-for-profit, 501 (c) (6) with a self-appointing board.

Over the years, the Telluride Tourism Board's efforts have evolved to address tourism management and sustainability to ensure preservation of the community.

In 2005, the Radcliffe Company was hired by the towns of Telluride, Mountain Village and San Miguel County to conduct a comprehensive evaluation of the Telluride Convention and Visitors Bureau, to form a new destination marketing organization, Marketing Telluride Inc. DBA Telluride Tourism Board. Radcliffe created a plan for the TTB, including organizational structure, destination marketing observations, staffing structure, budget and plan implementation. The 2005 Radcliffe Report can be viewed here.

The Radcliffe Company returned in 2019 to initiate another review of the organization to ensure effective resource deployment strategies and that overall performance was properly aligned with the needs of the industry and the community. The 2019 Radcliffe Report can be viewed here. 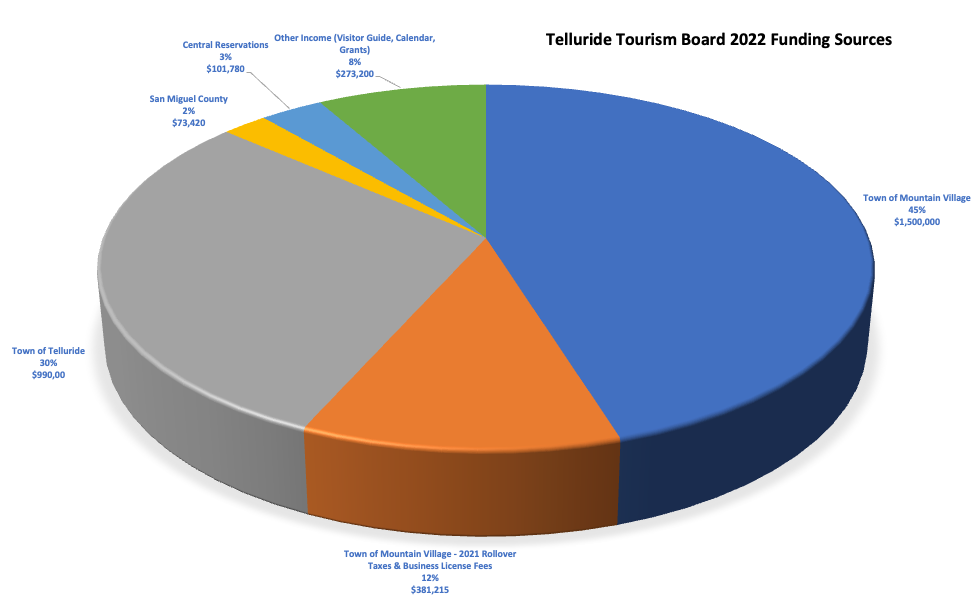 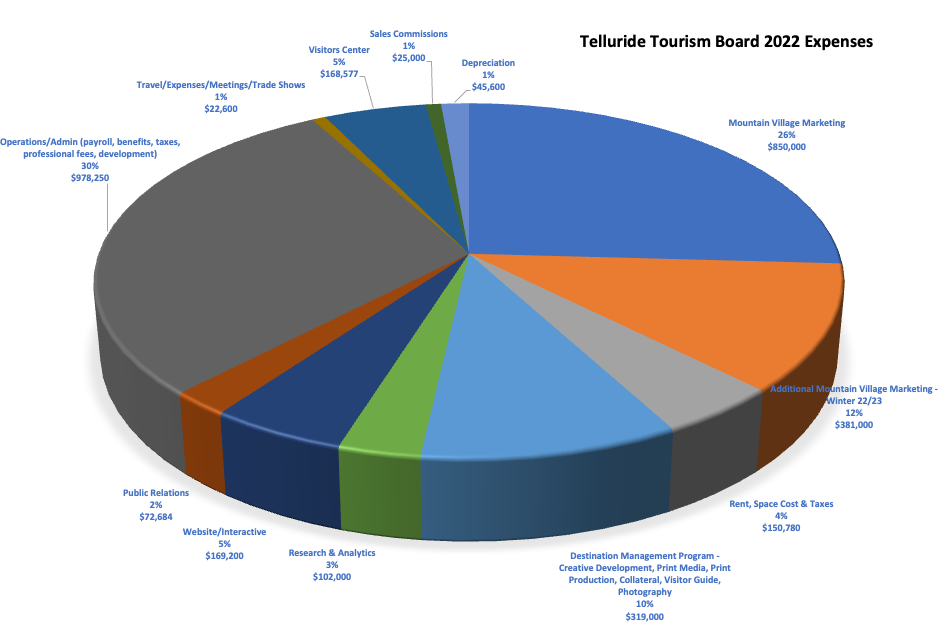 When the 2020 winter season abruptly ended, and the state and country shutdown due to COVID-19, the Telluride Tourism Board quickly pivoted its focus. All winter advertising was immediately paused, and the organization honed in on supporting the community through pandemic induced challenges. Paid destination advertising campaigns transitioned to COVID safety protocol messaging, buy local campaigns and leave no trace efforts. Public relations initiatives pivoted to supporting Public Health. All summer advertising was halted, and community outreach continued.

The Telluride Tourism Board team is passionate about the community and committed to assisting in its recovery. We all have established deep roots in this area, and want to ensure its sustainability for the future. Click here to view details about the TTB's community efforts through the pandemic.

Kiera Skinner has been on the Telluride Tourism Board team since May 2010, and became Executive Director in 2022. She started her career in ski industry and tourism marketing in 2001 at Purgatory Resort in Durango. In 2006, she moved to Telluride where she was Director of Sales and Marketing for property management company Resort Quest, and then opened and launched luxury boutique hotel Lumière. Originally from Boston, Kiera would spend summers in Colorado where her dad lived, and graduated from the University of Colorado Boulder. She visited Telluride for the first time in summer 1987 and fell in love with the beauty and character of the area. Now, she’s grateful to be raising her two children, Kyle and Camille, here with husband, Matt. Kiera currently sits on the board of Palm Arts as secretary, the Colorado Tourism Office's (CTO) International Promotions Committee, the CTO's Destination Stewardship Council, and assisted San Miguel County with PR efforts during COVID as Public Information Consultant.

After growing up in Telluride and returning home from college, Tom became a rafting, jeeping and snowmobile guide for Telluride Outside. After almost 10 years of guiding, and over 30 years of living in Telluride, Tom made the career change of going to work for Telluride Ski Resort. He started in sales and moved on to PR and Communications where he spent 11 years marketing the ski resort and Telluride.

Then, deciding to move on, had a very short tenure in the movie industry with the Quentin Tarantino’s The Hateful Eight, shot here in Telluride. As that production ended, the Telluride Tourism Board asked Tom to join the team in 2015 as the Director of Communications.

Shortly after joining the TTB team, Telluride’s Town Council had four seats come up for election and Tom took it upon himself to dip his toe in the political ring. He was elected to the seven-seat council in 2017 to a four-year term.

Tom’s passion for this community, town and box canyon shows as he has raised a family and started a second generation here in Telluride.

Allison was born and raised in the great city of Chicago. She earned her BA from Millikin University, where she played soccer and was elected to the Athletic Hall of Fame in 2018. Allison continued her education at DePaul University, earning a BA in journalism. While in Chicago, she worked for numerous news outlets, magazines, and television stations before making the jump to small-town life in Telluride.

Unlike most people, Allison moved to Telluride for the summers. She first visited Telluride in 2011, and like everyone else who has ever stepped foot in town, fell in love with the charm. Her now-husband proposed at Blue Lakes before they decided to make the move permanent in 2018 with their two dogs (she has since added a few more animals to her crew). She currently resides in Norwood and you can find her hiking, paddle boarding, off-roading, skiing, gardening, and rooting on her beloved White Sox, Bears and Blackhawks.

Jacob grew up in Atlanta, GA, and attended the University of Georgia where he earned his BBA in Economics.  Once he graduated, he decided to take a break from city life and thru-hike the Appalachian Trail.  Afterwards, he decided to explore living somewhere where the outdoors were more accessible so he could pursue his hobbies of fishing, backpacking, and snowboarding.  In 2015 that brought him to Telluride, where he’s lived ever since.

In Telluride he worked as a Lift Operator and Irrigation Technician before settling in at Christy Sports.  At Christy Sports he worked his way up from Ski Tech to Store Manager for over six years before joining the TTB team as Operations Manager in the fall of 2022.  He brings with him a focus on guest service and first-hand experience working in Telluride’s tourism-based economy.

Originally from Wisconsin, Jennifer Antista first came to Telluride over Black Bear Pass in 1975 and fell so deeply in love, that she moved to the area a month later. She became the caretaker at Skyline Ranch, and was married at the upper lake in 1976.

Jennifer then moved to Seldovia, Alaska, where she commercial fished, was a recreation director, and became an EMT II, to name just a few of her many endeavors. In 1979, she started a set net commercial fishing operation on an island in Cook Inlet for salmon. Her first child, Rawley, was born in 1980, and her second child, Lavender Rose, was born in 1982. It became a family operation and the two children became very much involved. When the Exxon Valdez oil spill disaster took place, Jennifer became the director of operations for the town’s response team.

In 1989, Jennifer moved back to Telluride, and was on Telluride Ski Resort’s Ski Patrol from 1990 through 1995, before her third child Alyssa was born in 1996. Over the years, Jennifer has managed a restaurant, became a massage therapist, climbed mountains and explored the backcountry with her family. Her love for Telluride continues to grow, and her passion is sharing her love for Telluride and the surrounding area with others and watching them glow.

The Telluride Tourism Board will hold quarterly Board of Directors meetings that the public are welcome to join. The next Board of Directors Meeting will be held on December 6, 2022 at the Wilkinson Public Library's Program Room at 10 a.m.

Cookies are used to make this website work and to enhance your experience. To learn more about the types of cookies this website uses, see our privacy policy. We need your consent to use marketing cookies. Marketing cookies are used to track visitors across websites. The intention is to display ads (via third party services) that are relevant and engaging for individual users. Please select the checkbox below to indicate your consent.